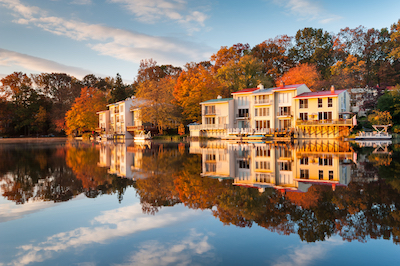 Reston homes are part of a planned community outside of Washington, D.C. that was founded in 1964 and built using the post-World War II concepts of suburban development in America. It was one of the first of its kind of community in America and helped truly spark the “planned community” idea at a time when it was revolutionary. Master planners were hired to create higher density housing in order to conserve open spaces, as well as to make areas for business, recreation, industry, and education. The growth and development of Reston real estate was watched by scholarly journals on architecture and land use, as well as national magazines and newspaper articles. As the area continued to grow into the 1970s and 1980s, it began to experience more and more traffic congestion from people who were commuting from their Reston homes to their jobs in Washington. The addition of the toll-road and public transit paved the way for the area to grow into a true edge city. However, since it was so well planned in its design, the community has avoided many of the problems an edge city would typically encounter like hostile pedestrian situations.

Careful zoning has allowed those living in Reston to enjoy several parks, large wooded areas, and even wildflower meadows, despite how much the city has grown. Residents have access to a wide variety of recreational options available throughout the year with nearly 20 public swimming pools, many paths for bike riding and walking, as well as tennis courts and golf courses for playing team games with others. Quality of life has been one of the main focuses of the area since its foundation, with the aim being to allow people to live, work, and enjoy their leisure time all within their own community. The common grounds and scenic beauty are able to be shared equally no matter what a family’s particular income level, and that beauty itself has been considered a necessary part of living “the good life” since the city’s conception. The annual events, like the Day-After Thanksgiving Parade and the Reston Multicultural Festival, encourage the entire area to come together as a true community and enjoy their city.

Amazing Education Awaits Those Who Live in Reston Homes

Families who live in Reston enjoy a robust economic situation as well as the some of the best educational opportunities for their children. Straddling the Dulles Technology Corridor, the area is home to tech companies like VeriSign and ComScore, and it also hosts the facilities for the National Wildlife Federation and Gate Group’s North American division. The technical, scientific, and professional services are what make up the greatest portion of the economic activity in the city, while many people also commute into Washington for their employment. All the families who live in the area are able to send their children to Fairfax County Public Schools, where two of the elementary schools are named after Buzz Aldrin and Neil Armstrong, as well as a wide variety of private schools. The community is dedicated to providing a positive educational experience for every student, from their elementary years through their years at the local universities. The city’s goal is to create a place where residents can grow and thrive together.

To learn more about this amazing place, visit the Reston Association and discover everything it offers!

End Unit townhouse with bump outs on 2 levels for a total of 5 bedrooms, 3.5 bathrooms conveniently located in sought after Reston near the Toll Road & Metro. With all t...

Spacious three-bedroom condo on top floor. This unit has lots of natural light. Hardwoods in the living and dining rooms, Ceramic Tiles in kitchen and wall to wall carpe...

NEW MODEL HOME NOW OPEN BY APPT! Homesite 34 is a 3 BR / 3.5 BA townhome on the a courtyard with tons of upgrades included. Designed for modern lifestyles, this contem...

Welcome home with this spacious 3-level end-unit townhome. There are 3 bedrooms, 2.5 baths, with a powder room and laundry on the ML. Wrap-around deck is perfect for natu...

Beautifully renovated and updated with modern colors and styling, this spacious townhome will not disappoint the most discerning buyer. Gorgeous ceramic tile throughout t...

Welcome Home! This condo has been updated, lovingly maintained and offers the best of suburban living with a plethora of community amenities. When you first enter you wil...

Luxury living in Midtown! Freshly painted, light and bright 3 bedroom, 3 full bath condo with all the amenities! Perfect for work from home and close to everything! En...